As the coronavirus pandemic continues to unfold and new signs of lockdowns beginning to be slowly lifted in Europe, all eyes in the crypto community are back on the Bitcoin (BTC) halving. The event is only 10 days away, and Bitcoin’s price seems to be acting accordingly, having surged an incredible 23% to a monthly high above $9,400 earlier this week.

A widely celebrated event in the cryptocurrency industry, the halving is part of the Bitcoin monetary policy, in which every four years, the Bitcoin mining reward is cut in half. This means that on May 11, 6.25 BTC will be issued every 10 minutes, instead of the current 12.5 BTC.

The upcoming halving will be the third since Bitcoin’s inception, and the event brings with it some bullish views for the asset’s value.

According to PlanB, the creator of the much-discussed “Stock to Flow” model, the reduction in Bitcoin’s issuance rate is bound to increase BTC’s price in the long-run. Recently, the analyst said in a tweet:

“IMO #bitcoin 2020 halving will be like 2012 & 2016. As per S2F model I expect 10x price (order of magnitude, not precise) 1–2 yrs after the halving. Halving will be make-or-break for S2F model. I hope this halving will teach us more about underlying fundamentals & network effects.”

Opinions are mixed when it comes to the price action after the halving, however. Some believe it will undoubtedly bring higher prices while others believe that this factor is already accounted for in the current prices, given that it’s publicly available knowledge. Other investors disregard the importance of miners and the reward issuance, as they are convinced that speculation is the sole driver of Bitcoin’s price.

Miners create constant sell pressure by liquidating their newly minted coins in order to pay for their electricity and hosting expenses. While traders take advantage of short-term volatility, miners ultimately “dictate” Bitcoin’s price on the supply side.

This is, of course, not as linear as it sounds. Volatility will also dictate which miners can stay on the network, and if prices drop too low, some miners may go bust, as their operations are no longer profitable. A good example of this can be found in the infamous March price crash.

Miners are not the only market players who create sell pressure, but the majority of volume on exchanges doesn’t represent real buy or sell pressure but, rather, short-term moves that traders buy and sell repeatedly.

As such, miners are the only actors creating consistent sell pressure for freshly mined coins. With this in mind, it’s important to understand what miners have been doing as the halving approaches since their behavior can say a lot about what the post-halving Bitcoin price will look like.

By analyzing certain transaction patterns through the Bitcoin blockchain, it’s possible to extrapolate information that can complement trading strategies. For example, Joe Nemelka, a data analyst, at CryptoQuant, an on-chain data company, recently told Cointelegraph that an increase in miner inflow to exchanges can signal incoming volatility.

According to Nemelka, the percentage of miner inflows to exchanges compared to all other inflows (other exchanges, wallets, etc.) is noticeable. As shown by the chart below, one can also see some spikes above 6% in the Miner to Exchange Flow Percentage signaled a change in price trends. 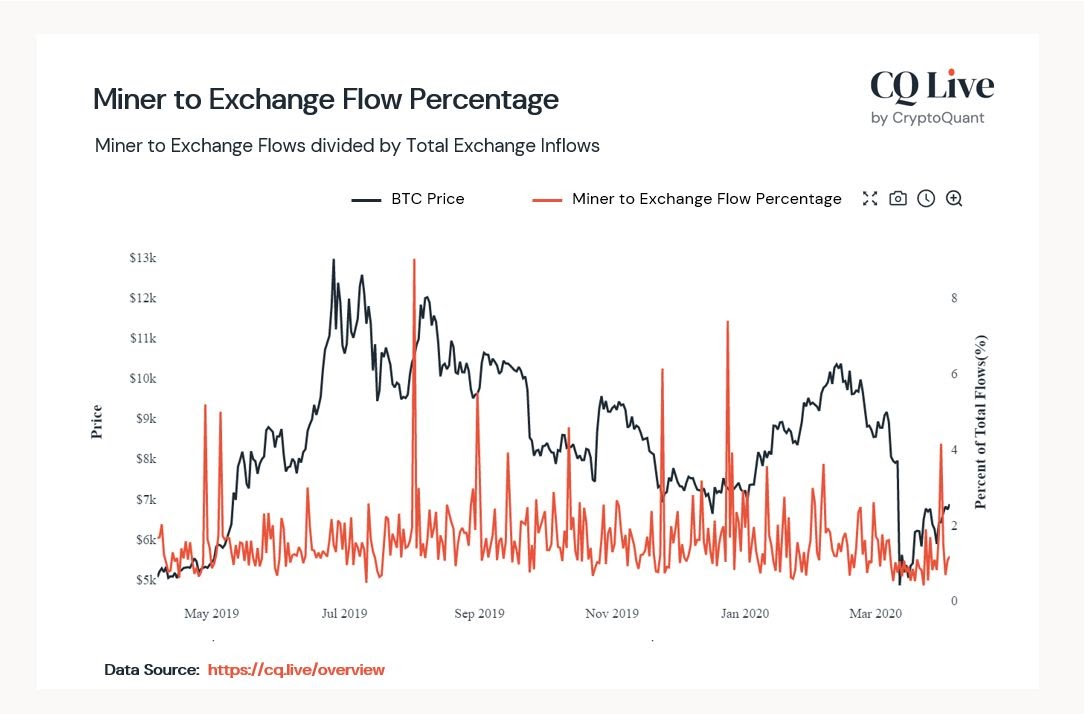 Miners liquidate their Bitcoin holdings for a variety of reasons, and tracking this, alongside investor sentiment, is valuable for spotting divergences and subtle trend changes.

For example, when exchange inflow from miners is abnormally high in a bull market, miners may be profiting and creating increased selling pressure at certain price levels where they feel it would be wise to sell at.

Conversely, a high inflow at times when the price has been declining can signal that a large number of mining operations are capitulating — a process that can signal a change in the market as more resilient miners hold on to their BTC and decrease sell pressure afterward.

What are miners up to?

While the Miner to Exchange Flow Percentage dataset allows market participants to spot spikes in miner selling pressure, the Miner Position Index allows us to understand trends when it comes to miners holding or selling Bitcoin. 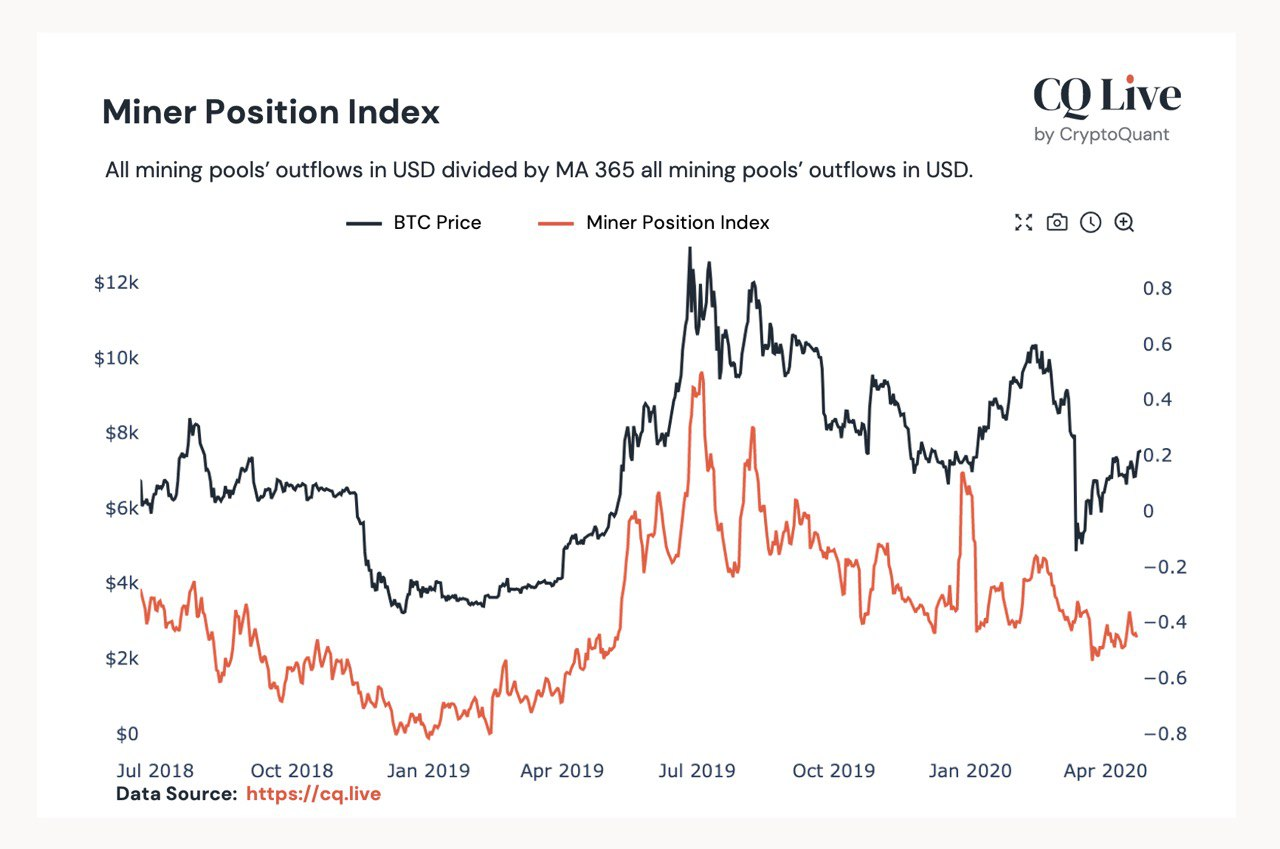 The chart above shows that since January, miners have been holding Bitcoin, possibly hoping to sell it at post-halving prices. Mason Jang, the CSO of CryptoQuant, told Cointelegraph:

“MPI (Miner Position Index) highlights periods where the value of Bitcoin’s outflow by miners on a daily basis has historically been extremely high or low. MPI values above 2 indicate that most of the miners are selling Bitcoin. Also, If MPI is lower than 0, it means there is less selling pressure by miners. Therefore, it could be a good signal to buy BTC.”

Will history repeat itself?

Historically, the Bitcoin halving has been followed by a significant increase in price, which is also another point in favor of an accentuated price rise following the upcoming fork. However, history doesn’t always repeat itself, and although on-chain data may help to navigate the upcoming event, it’s worth noting that the cryptocurrency market has changed tremendously since the last Bitcoin halving in 2016.

Data from CryptoCompare also shows that 2020 has seen daily trading volumes that are consistently 10 times larger than those in 2016. To put this in perspective, in 2016, the total daily Bitcoin volumes on spot exchanges rarely exceeded $1 billion. Fast forward to March 13, 2020, and top-tier exchanges have hit a record-breaking $21.6 billion in daily spot volume. 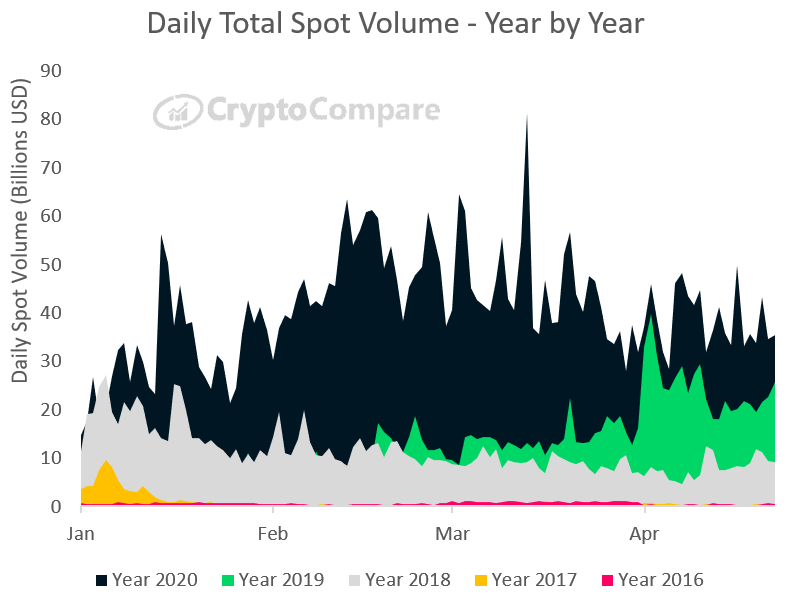 The chart above shows just how much the market has evolved compared to previous years. Considering the sky-high volumes seen in 2020 and the fact that more market participants are involved, the drop in sell pressure from miners is likely to have a drastic impact on overall Bitcoin sell pressure. This means that the upcoming halving may not translate into a massive rally in Bitcoin’s price.

What can we make of this? Although the halving has been a historically bullish event for Bitcoin, it doesn’t necessarily mean it will always be so. While on-chain data is a great tool to complement one’s trading and investment strategies, it should be looked at within the broader context.

The market has matured tremendously since the last halving and the new participants have brought higher trading volumes and there are more transparent, accountable, and regulated venues. Furthermore, the current coronavirus pandemic has shown that conventional expectations of market behavior can change swiftly.