Multiple analysts from Cointelegraph contributor filbfilb to veteran commodities trader Peter Brandt all pointed to a popular logarithmic model that stressed the importance of the $6,400 level. 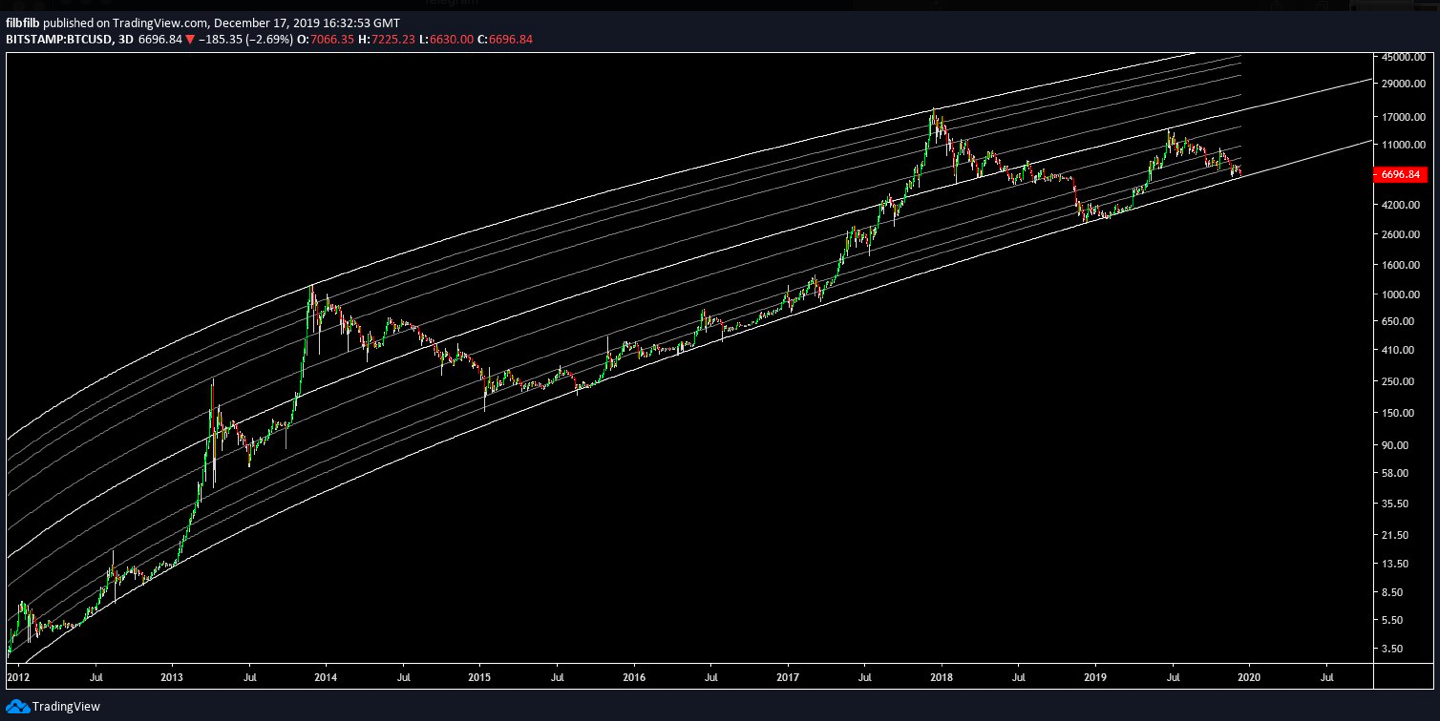 This week’s bounce off $6,400 is provided some short-term relief from investors believing that a BTC price catastrophe was avoided. Nevertheless, Bitcoin is not fully out of the woods yet.

Bitcoin flips back to bearish

Since Thursday’s 10% gain, the price has settled back below the $7,300 resistance and below the 20-day simple moving average of the Bollinger Bands indicator. 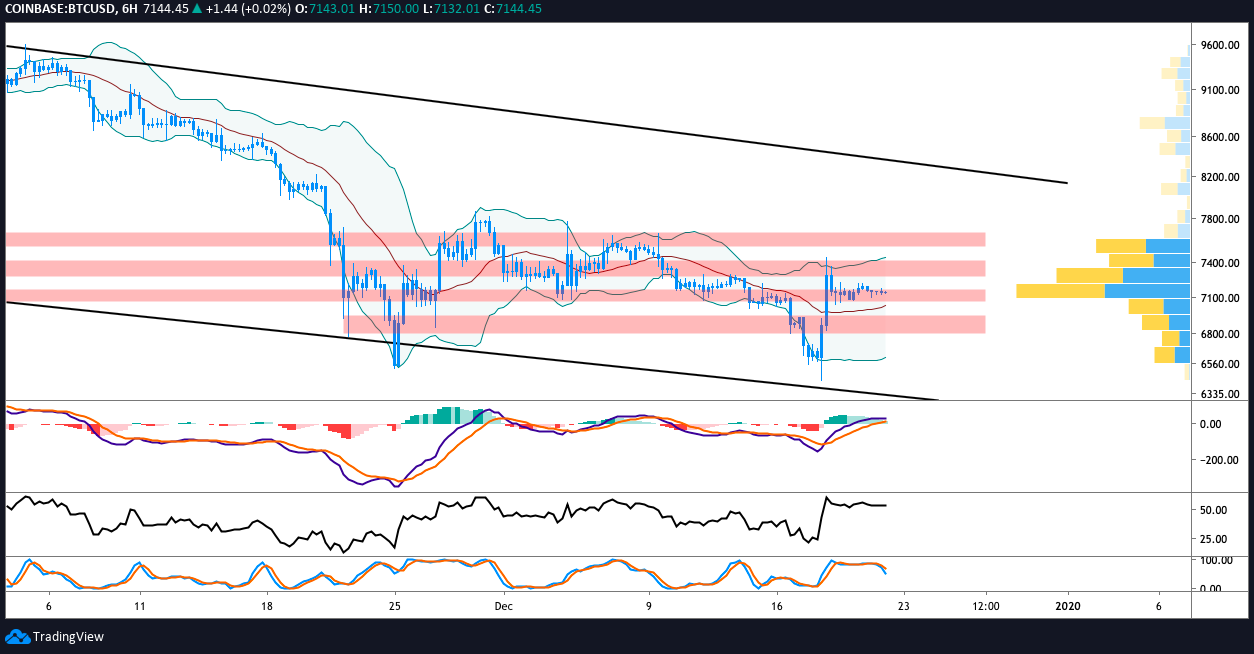 A drop to the lower Bollinger Band would place the price below the $6,800 support and increase the chance of revisit to the descending channel support.

As mentioned previously, failure at the descending channel support ($6,345) also opens the door again for a drop to $5,350. Since topping out at $7,452, the price has painted a lower daily high and the 6-hour chart shows that momentum is fading as the price range tightens and moves closer to the 20-SMA.

The same can be observed on the moving average convergence divergence (MACD) where the histogram shows momentum slowing.

The MACD has ceased its ascent by flattening and pulling closer to the signal line. The relative strength index (RSI) on the 6-hour timeframe has also flattened, mirroring Bitcoin’s sideways price action.

Stay above $6.3K to avoid the fray 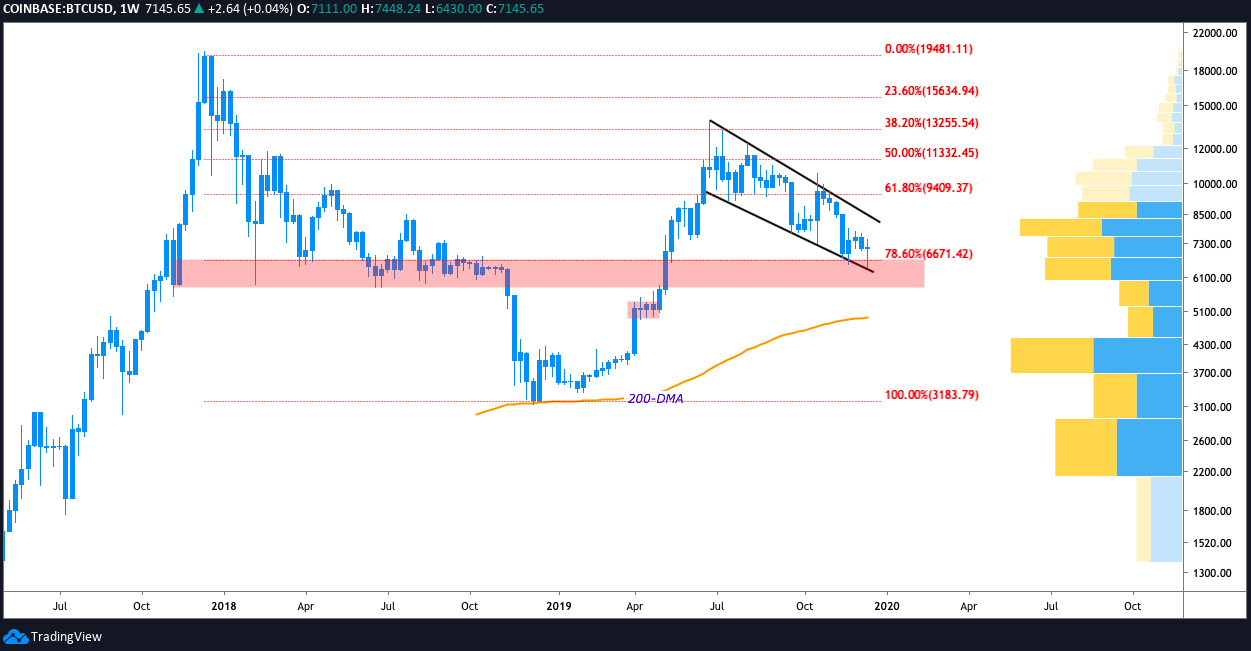 So, from the weekly timeframe, down to the 4-hour timeframe, Bitcoin price action is bearish and needs to hold $6,685 to $6,274 to avoid a drop to $5,300 where the daily chart shows investors interest.

Anyone familiar with Bitcoin and crypto knows that the price action is driven by more than just chart technicals. So let’s have a look at some of the other factors that may be influencing Bitcoin’s price.

Things to watch with Bitcoin price

This week Cointelegraph reported that long positions at Bitfinex continue to steamroll higher and this week BTC/USD Longs have soared to a new all-time high. 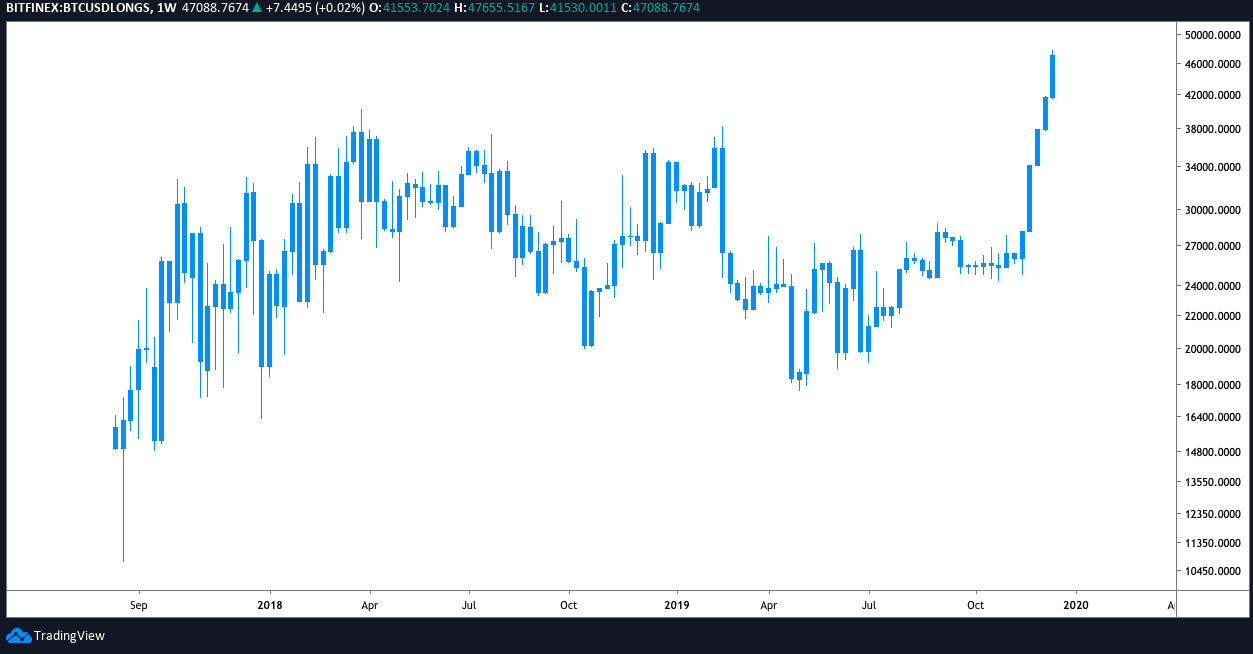 Some analysts cautioned that Bitcoin is overdue for a strong squeeze on long positions and others attempted to decipher why long positions continue to rise in the face of increasingly bearish price action.

A general theory is that investors believe Bitcoin price will not fall far enough to liquidate leveraged longs and with the 2020 halving event approaching investors believe they have more to gain from being long rather than short.

Cointelegraph contributor Michael van de Poppe recently tweeted that the expectation that a long squeeze is overdue is false. He explained:

“There seems to be a narrative that longs need to be squeezed before we can move upwards. That’s a wrong statement, based on history.”

According to de Poppe:

“The ATH’s of longs on Finex was constantly around a low of Bitcoin. They started to drop with a breakout upwards.” 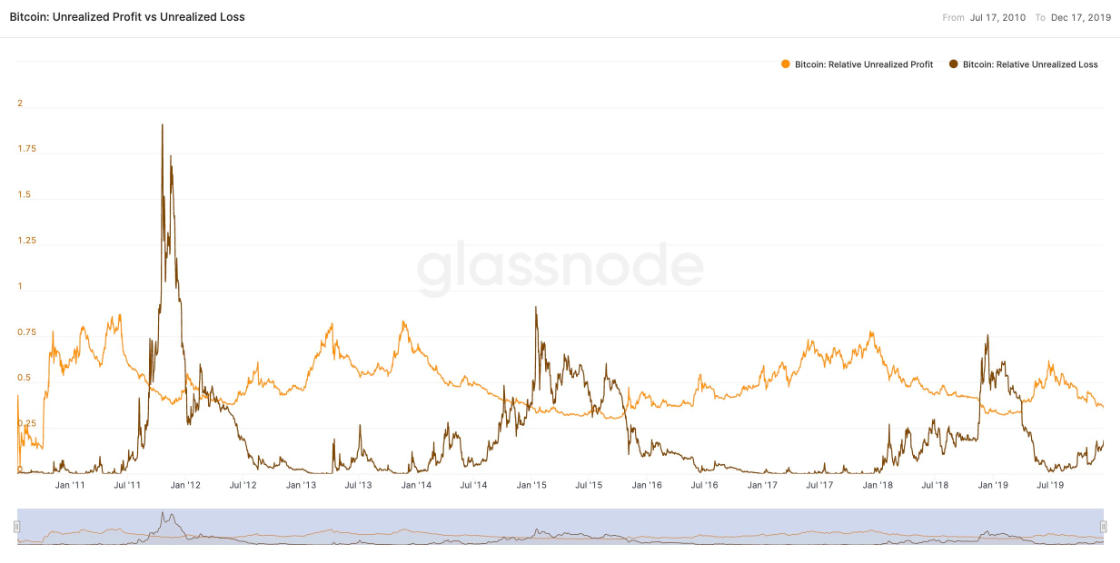 “Bitcoin Unrealized Profit is low at the moment & seems to be trending down. At the same time, Unrealized Loss is trending up. Look out for a cross over, historically signaled bottoms.” 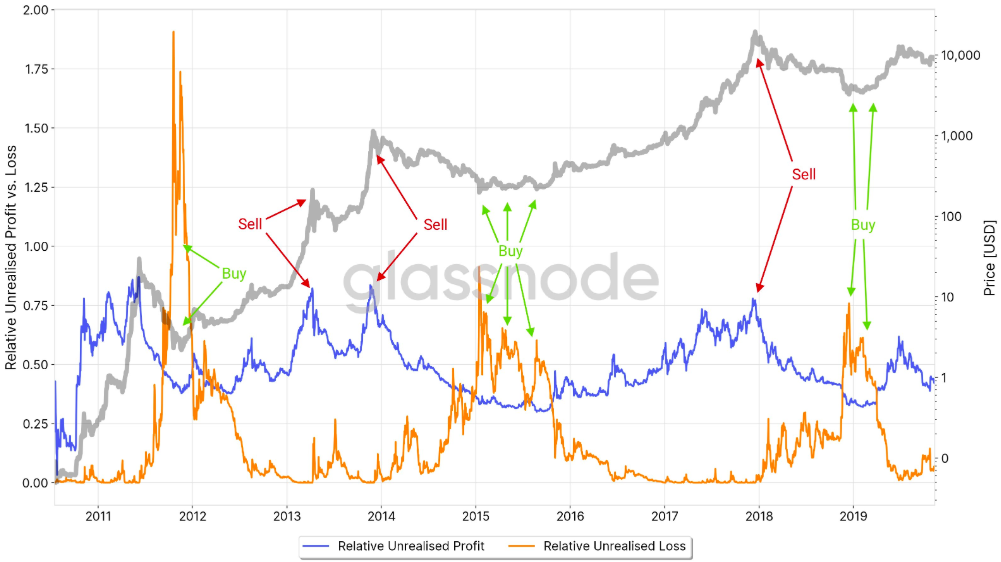 The Crypto Dog suggested that “as traders have less profit to realize, sell pressure could reduce.”

Fear is on the rise!

Despite Thursday’s $1,000 gain, investor sentiment remains strongly bearish and the Crypto Fear and Greed Index currently shows a reading of 20, which falls into the ‘Extreme Fear’ category. 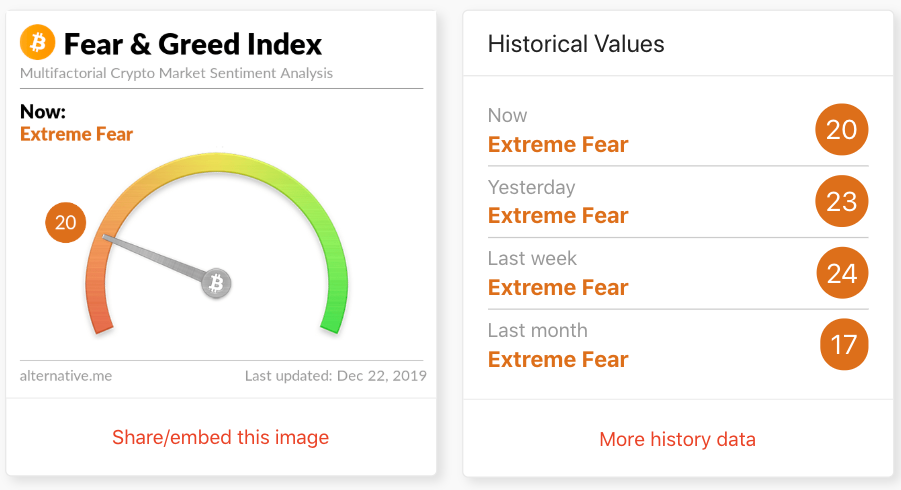 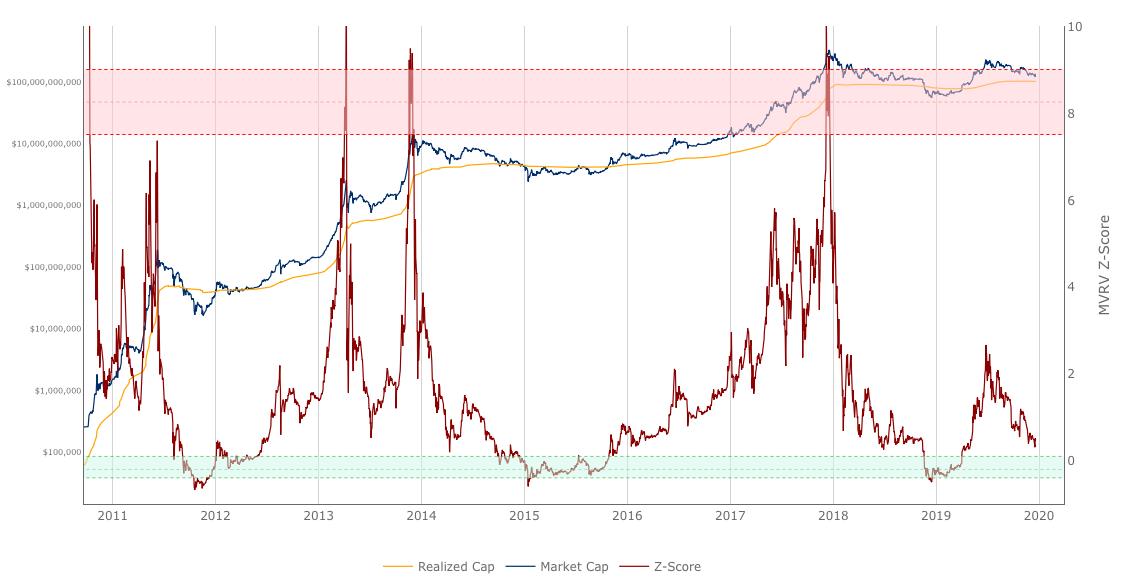 The MVRV Z-Score also provides valuable insight into Bitcoin’s current price action. According to market analyst Philip Swift, the indicator can be used to identify periods where Bitcoin is over and undervalued “relative to its fair value”.

“The MVRV Z-score has historically been very effective in identifying periods where market value is moving unusually high above realized value. These periods are highlighted by the z-score (red line) entering the pink box and indicate the top of market cycles. It has been able to pick the market high of each cycle to within two weeks.”

The indicator also signals when the market is significantly below the realized value and this can be observed when the Z-score enters the green box.

Currently, the market cap is drawing closer to a cross with the realized value and the Z-score is dropping closer to 0 (the green box).

All of this suggests that Bitcoin still has more bearish days ahead but the macro view of the digital asset’s price action remains encouraging, or perhaps one should say “exciting.”

The 4-hour to weekly timeframe shows a bearish bias and the bounce of the crucial support at $6,400 failed to produce a trend reversal. In fact, at the time of writing, Bitcoin seems likely to again retest the lower support of the long-term descending channel.

A drop to these levels would likely push the market cap below the realized value and the Z-score and NVT signal into oversold territory. If past performance can in any way be interpreted as precedent, one would then surmise that this event would precede the commencement of a trend reversal and a new strong market rally.

Of course, all of this can be averted and the entire bearish analysis nullified if Bitcoin can sustain above $7,600 and eventually break above the $7,800 to $8,000 range to pull off a trend reversal.

Only time will tell.

In the meantime, swing traders and long-term investors could consider placing a buy order at $5,500 just in case; and day traders will continue to watch for Bitcoin price to press above $7,300 and take another shot at the resistance at $7,600.

The views and opinions expressed here are solely those of the author (@HorusHughes) and do not necessarily reflect the views of Cointelegraph. Every investment and trading move involves risk. You should conduct your own research when making a decision.