Bitcoin Price Bulls Have Only One Objective Before Next Week Starts

Bitcoin (BTC) price is up 1.23% for today’s session at $9,175 having reclaimed the $9,000 handle, after briefly losing it and finding lows of $8,800. Overall, the biggest cryptocurrency by market capitalization is down 1.8% from where it was at the same time on Thursday.

With a week remaining before the close of May, the monthly chart of bitcoin clearly demonstrates that Bitcoin has a long-term challenge to overcome, which is reclaiming the $10K handle. But more specifically, it must record a ~$9,300 monthly close that has eluded Bitcoin for the last 10 months, which sets the tone for the current price action. This is likely to take place over the course of the next week. 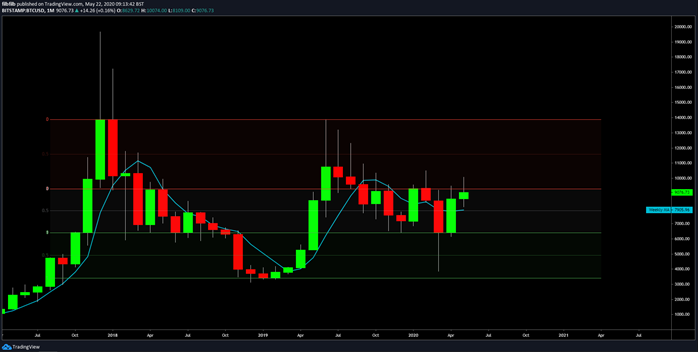 The 1-day chart for Bitcoin shows that trading today is still occurring below resistance and that Bitcoin has currently posted a lower high on a macro level after forming a lower low. This market structure will need to change before Bitcoin can be declared bullish with more confidence.

The high level of spot volume occurring at the $10K level shows that there is potentially more external interest around this price point, which is a positive for the bulls, despite the high timeframe resistance of $9,300 being temporarily lost as support. 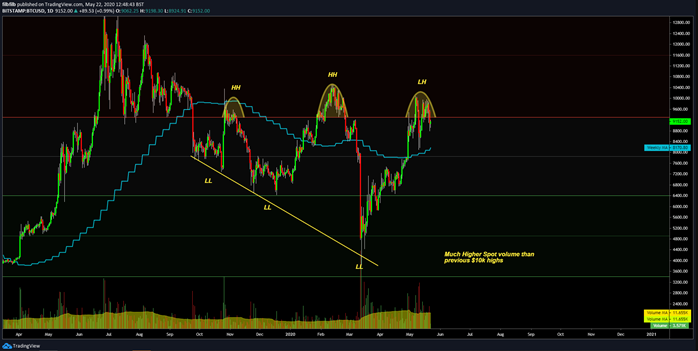 Following yesterday’s selloff, the chart shows a loss of momentum with the MACD crossing bearish, indicating that there is a stall in the upward momentum and that further consolidation may be necessary before continuation. The MACD line is above the zero line, meaning that the underlying trend has not turned bearish yet.

The RSI is currently still at above 50, which is generally considered to be bullish and there is arguably a small hidden bearish divergence developing. But clearly, the trend is currently down and is similar to that has been seen previously when there has been a rejection at the $10K level. 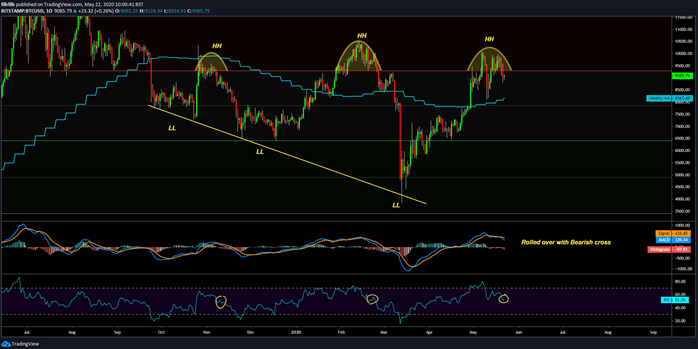 The downtrend, which took Bitcoin to the lows, has now been broken from. Meanwhile, a so-called Adam-and-Eve bottoming pattern has formed and is being broken out from ahead of the East coast open and the final session for the week at the CME, which can typically result in a volatile afternoon.

The MACD and RSI are also both implying that there is momentum on lower time frames to move up. The target of the Adam-and-Eve bottom is around $9,500, which is also the 61.8% of the move down. So there is reason to believe that there’s momentum to at least retest the mid-$9,000s over the weekend. Failure to maintain the bottom for Bitcoin here would likely lead to a retest of the lows of $8,200 which is also the 20-week moving average.

3 scenarios for the price of Bitcoin

Three scenarios can be proposed — due to the nature of the market currently having a fairly defined market structure — which can work as a framework for what may occur beyond the lower timeframe. 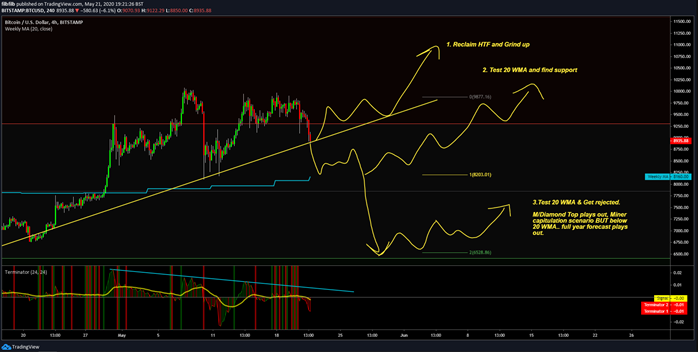 If Bitcoin can quickly reclaim the high timeframe resistance of $9,300 and close the month above, there would most likely be an ascending triangle to also support the strength of the move.

This scenario implies that the selloff action has been a sophisticated attempt to keep prices below $10K to enable accumulation before a move higher. This is somewhat unusual given previous selling interest at these prices and that there has been a long time to accumulate lower.

However, the change in the economic climate and the comments from traditional finance figureheads such as Paul Tudor Jones may be indicative of a change of sentiment. Should this occur, a relatively fast move to $11.5K could be expected as sell-side liquidity dries up and is only available on the book above $10K.

If Bitcoin is unable to reclaim the levels aforementioned, the likely inevitable breakdown would be to retest the May lows and 20-week MA, currently around $8,160. Typically this is the line in the sand between continuation higher and a more meaningful bearish downturn. Should support be found here, a slower move to retest $10K could be expected, but it would be the first time that the mid $8K range has acted as support and would be a very bullish sign.

A breakdown at the 20-week MA would be and has been previously, indicative of lower prices and a longer-term correction. This would also suggest that there is a diamond-shaped topping target that would have a target of around $6,500, which is also the critical mid-range that Bitcoin has spent most of the past few years in.

This may be argued as being wishful thinking by many bulls at this stage and is preemptive of a more fundamental breakdown. But while these scenarios are useful for planning ahead, the main focus for traders over the next week is printing a higher high on the monthly close.