Bitcoin Price Grapples With $10K — 2 Scenarios for The Week Ahead

Bitcoin (BTC) bears took their pound of flesh last Wednesday. However, was this simply a long-overdue correction that was needed for Bitcoin to continue to rally to fresh highs?

Today I’m going to look at the two scenarios that could play out next week.

The bearish scenario for Bitcoin price 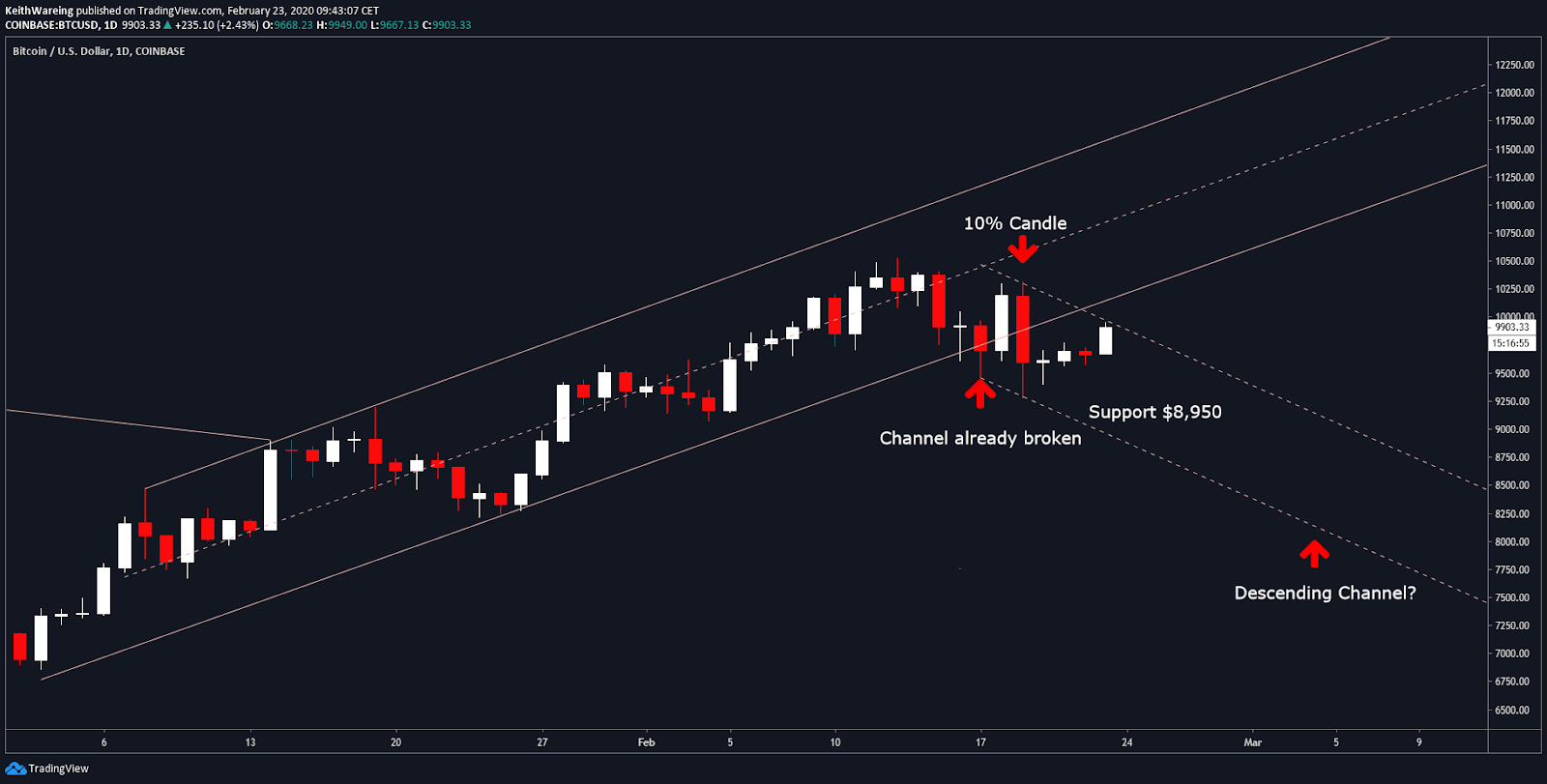 It was a devastating blow for bulls last week on Wednesday, Feb. 19, as Bitcoin fell by approximately 10% in a single hourly candle. However as can be seen in the chart above, this channel had already been invalidated two candles prior, and what followed next is what seems to be a blatant display of whale flexing designed to leave both left both longs and shorts completely rekt.

This leaves Bitcoin in the early stages of a descending channel, which could see the leading digital asset retrace to $7,500 over the next 2-3 weeks. So right now, it’s important for Bitcoin to break out of this channel to reclaim a bullish trend.

The resistance here is $9,900 (which is what the price is currently at) and the support is $8,950. However, what if the original ascending channel wasn’t valid?

The bullish scenario for Bitcoin price 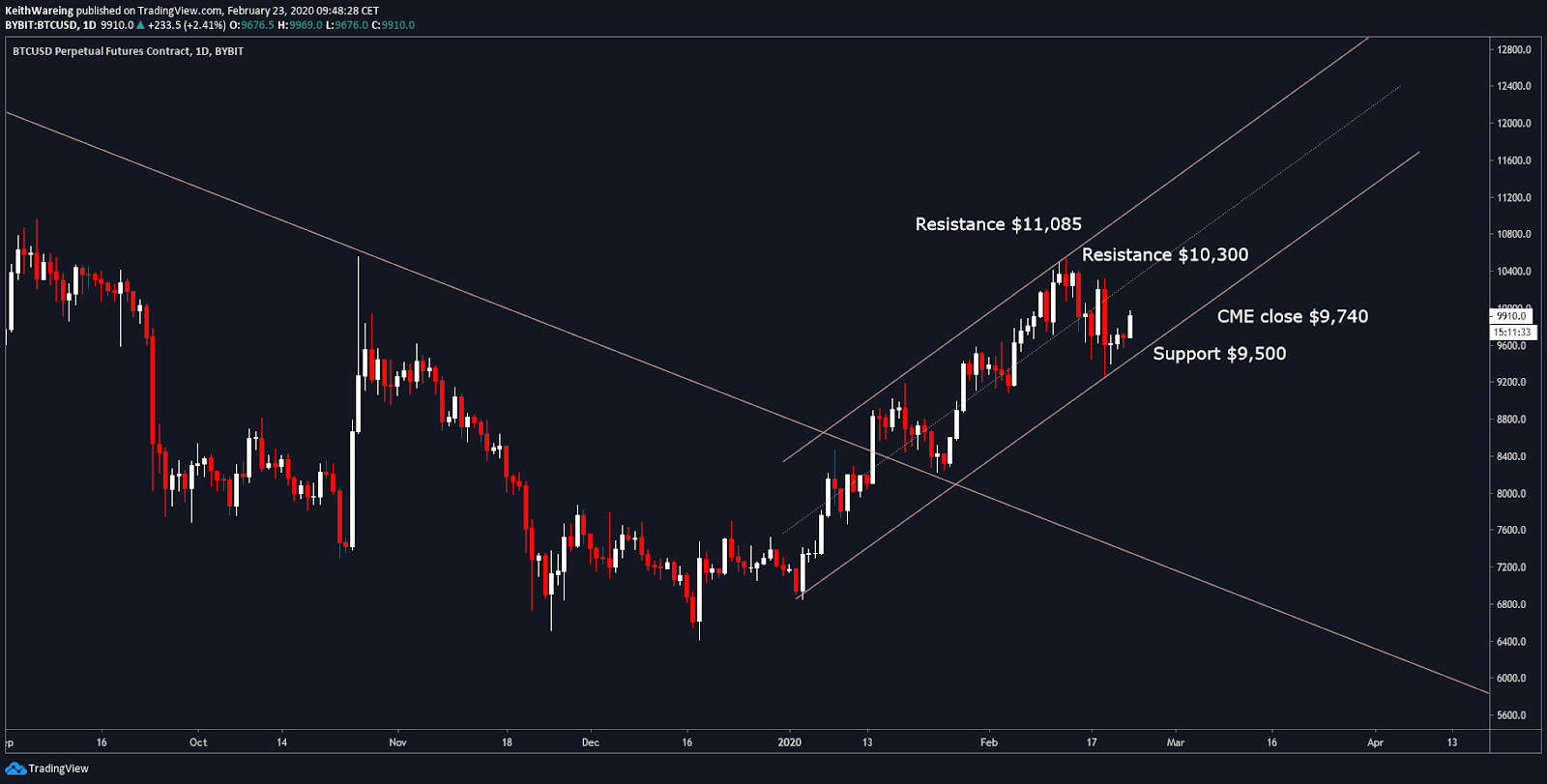 The bull in me wants to believe that the low we hit last Wednesday of around $9,250 has opened up the possibility of a slightly wider ascending channel, one that now sees support at $9,500 and resistance at $10,300 and then $11,085.

Annoyingly since the CME closed at $9,740 on Friday, both channels would remain valid in the highly likely event of the gap-filling in the week ahead.

As such, a glance at some key indicators can perhaps give some insight as to what we can expect. 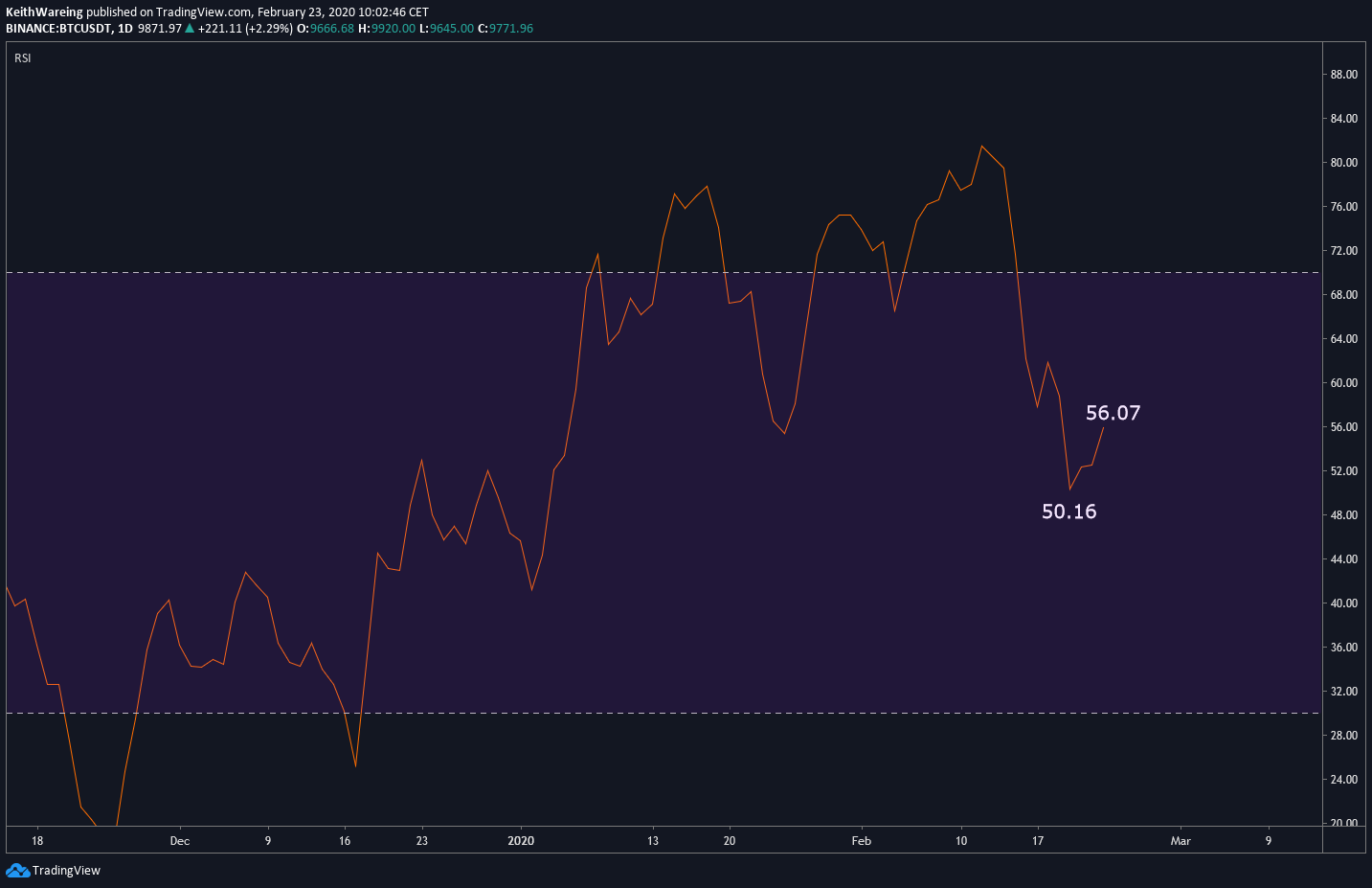 The Relative Strength Index (RSI) Indicator remains remarkably neutral, with a reading of 56.07 on the daily. However, it did show Bitcoin as being massively overbought in the days leading up the selloff.

Bitcoin bounced off 50.16 on Feb. 20 and changed its trajectory from heading to oversold back up towards the overbought range. However, it’s too early to tell, but this could still go either way right now, and the weekly view of the RSI is very much the same.

The MACD is showing early signs of a bullish reversal 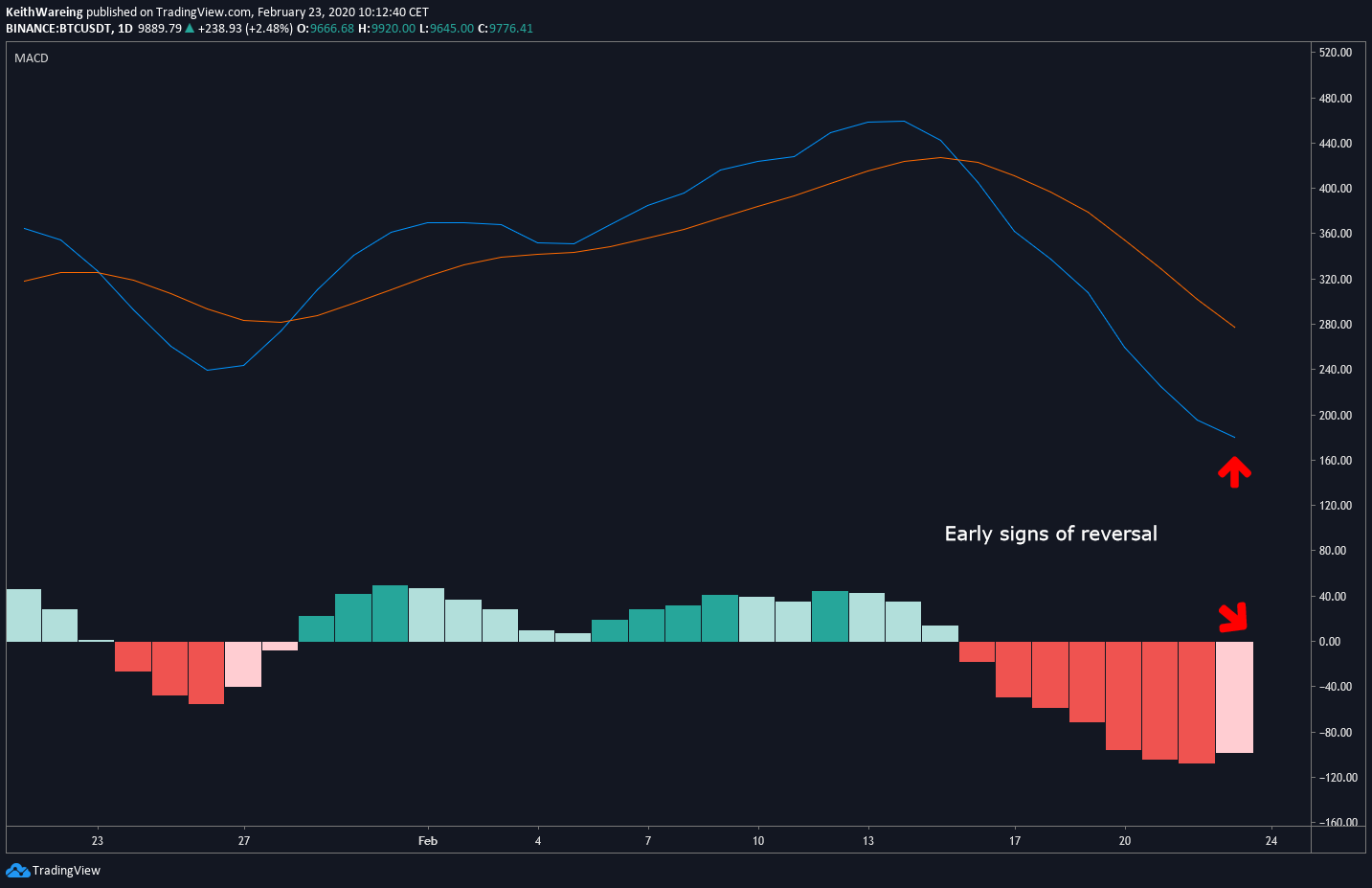 The Moving Average Divergence Convergence (MACD) is slowly starting to pinch up, this is an early sign that we are going from bearish to bullish. This is further echoed by the pale pink candle on the histogram.

This can also be interpreted as bearish to an extent. However, the weekly MACD is still in full bullish flow, and past performance of Bitcoin when the MACD has crossed bullish on the one-week chart has typically led to several months of price increase, while also keeping in mind that we’re only one month in.

Which leaves one last indicator that seems to have been impacting the price lately. 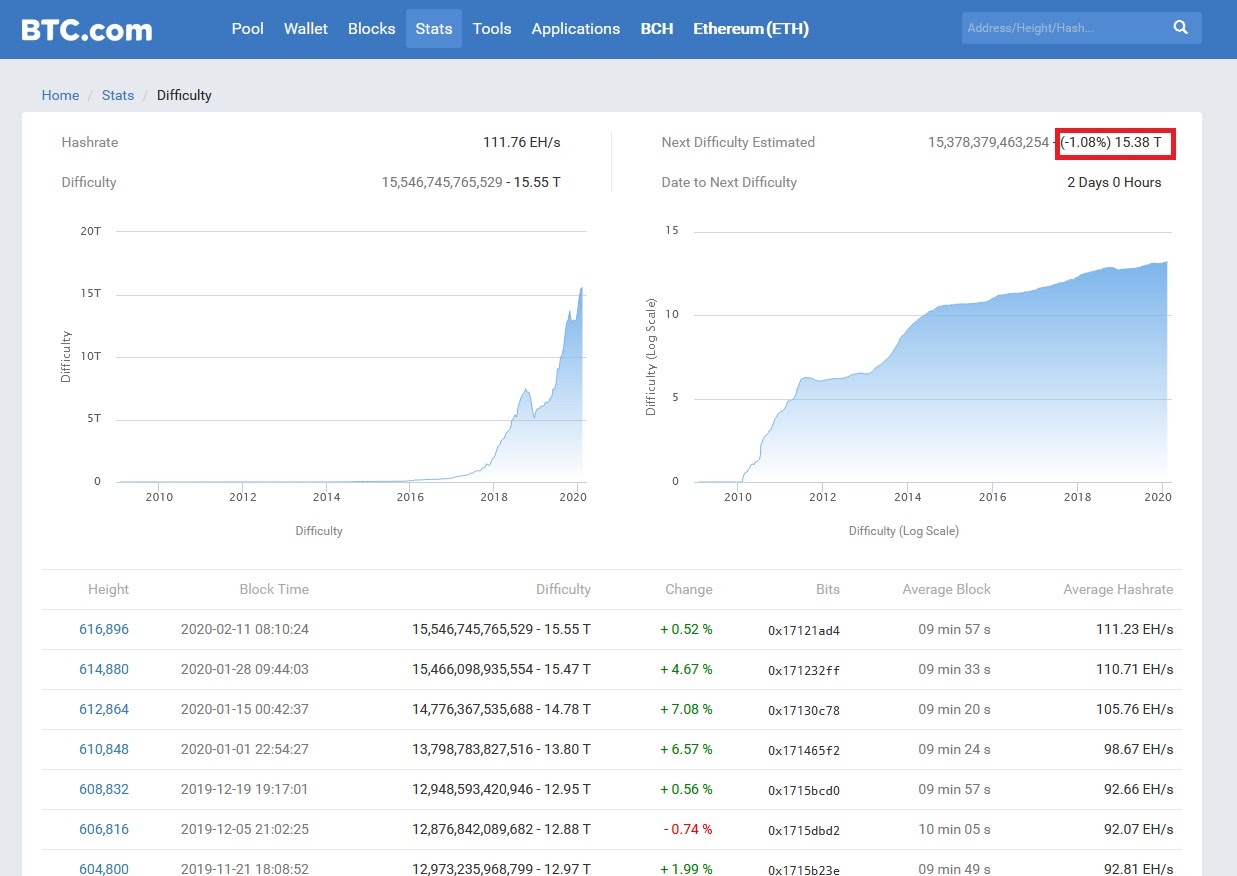 Next week, the mining difficulty is set to be around -1%, the first expected drop this year.

Given that the price has increased around the same time the difficulty has gone up, it would indicate that the week ahead is unlikely to be bullish or bearish, but rather quite a neutral week of sideways action.

The week ahead for Bitcoin looks to be rather neutral. As a trader, I’m looking for confirmation of the bullish or bearish scenarios laid out in today’s analysis.

Should $9,500 fail to hold as support, then I’ll be looking at the bearish scenario, which shows the next level of support at $8,950.