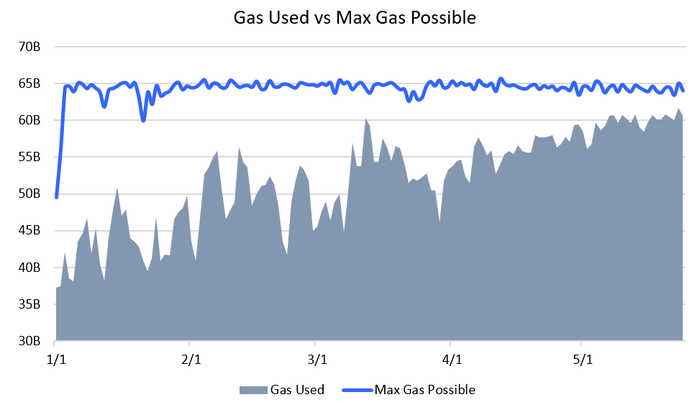 The total gas used is unlike the transaction fee metrics in the Bitcoin blockchain. On the Ethereum network, transaction and smart contract fees are determined by the gas required and price of gas, a mechanism that allows the fees to be dynamic and somewhat detached from the price of Ether (ETH).

While the gas usage is at an all time high, the sheer number of transactions on the Ethereum blockchain is far from the all-time high of 1,349,890 transactions reached on January 4, 2018.

This means that the increase in the total gas usage figure comes from a higher use of smart contracts which are more complex and therefore require more gas.

According to ETH Gas Station, the usage is coming mostly from USDT, with around $1.61 million spent just in Ethereum gas fees. This figure is followed by DeFi applications and a few scams and ponzi schemes. USDT is also leading in terms of average gas price used, at 35.5 Gwei.

Following the USDT stablecoin, decentralized exchanges (DEX) seem to take the lead in terms of popularity. According to DappRadar, IDEX is the most used dapp by sheer number of transactions and both IDEX and Kyber are in the top 3 of dapps by users on the Ethereum network.

A recent survey has also shown that the highest awareness and usage in DeFi come from decentralized exchanges.

The amount of overall gas used is restricted to the block gas limit set by miners and this serves to limit the size of the Ethereum blockchain by determining how many transactions fit in a block. The gas used in each block has been increasing steadily, rising from 69% in January to 95% at the time of writing and also nearing the currently defined limit.

Given the increased gas usage currently seen on the network, and the associated block gas limit, it is possible that Ethereum will be faced with network congestions in the near future due to a number of factors. If gas usage rises to the block limit level, users will have to compete with higher gas prices in order to execute transactions and smart contracts.

Moreover, a sudden crash in the price of Ethereum can lead to higher fees and network congestions as seen during the crash of March 12 when, according to a report by The Block, average fee costs increased from $0.16 to $1.04.

In a high volatility situation like this, traders may find network congestion quite cumbersome as leveraged positions on DeFi platforms and centralized exchanges may be liquidated before they can act.

However, this change will further exacerbate Ethereum’s blockchain size which already sits at almost 140 GB. As so, it seems like there is no easy solution and Ethereum is faced with quite a challenge when it comes to scalability. 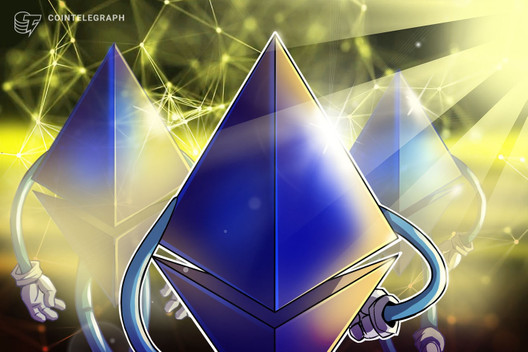