Rumors started circling in April that Reddit was tinkering with a token-based tipping mechanism on the platform. This week, it was revealed those rumors were well-founded.

And the beautifully expressed rationale was clear:

“In the beginning, the Internet was a free frontier — a land of openness, creativity and possibility… Then the amusement parks opened. Millions abandoned the frontier, drawn to the glitzy rides and manicured lawns… At first, everyone loved the parks. Until they built walls and billboards. And spied, manipulated, and censored the people.”

Which is exactly the reason Google really seems to hate crypto and Facebook wants to co-opt it.

But now one of the largest online communities on Earth is embracing crypto and tokenization. According to Alexa, Reddit is the world’s 19th most visited website. To put that into context, Twitter ranks 47th.

The massive American social news aggregation, web content rating, and discussion website is trialing the tokenization of its community points system in two subreddits: r/cryptocurrency and r/FortniteBR. Between them, they have over two million subscribers.

It is almost more surprising that Reddit took as long as it did to embrace cryptocurrency. Industry chatter is widely-disseminated on the platform, and the demographics of its user base (skewing young, male, and interested in tech) overlap strongly with the crypto community.

Reddit will distribute tokens to users within the subreddits based on their current levels of karma. Community points will be named according to the subreddit in which they are earned, with the cryptocurrency subreddit’s reward tokens to be labeled “Moons”.

The tokens can be traded between users or used for different things within the platform, such as for displaying reputation, unlocking badges, GIFs, and other features. They also lend holders voting weight in polls.

The popular community chat site is a welcome addition to the growing family of tokenized forums. Moreover, the structure of the initiative is a demonstration of pure decentralization. As Reddit explained:

“Community Points are fully controlled by the people who own them. They live on the Ethereum blockchain, which uses the same technology to guarantee property rights and control. Even Reddit cannot take them away.”

Reddit. Welcome to the crypto fold. This week you Nailed It.

Opinions expressed in this column are those of the author. 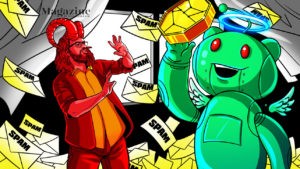